On the occasion of the World Environment Day, AFI Ploiesti and Environ Association in partnership with Association Sistemul National de Reciclare a Bateriilor (SNRB) (National Battery Recycling System) organized an event dedicated to children in order to teach them the basic principles of collection and recycling of waste, thus promoting special containers located in three intensively circulated areas of the shopping center.

Hundreds of children accompanied by parents or grandparents competed in educational contests organized especially for them, at the end of which they were rewarded with attractive prized: kick scooters, lego, drawing books, puzzles, yo-yo toys, T-shirts and special boxes to temporarily store at home consumed batteries.

Throughout the 8 hour fun marathon, the kids drew, participated in waste appropriate collection contests, creative recycling workshops and treasure hunt competitions and they sang the hymn of little ecologists ,,Baterel saves, recycles and rewards you” and posed for famous caricaturist Adrian Bighei. The biggest attraction of the day was the campaign mascot ,,Baterel and Non-E World” that the little ecologists had the opportunity to meet, to get acquainted and to take photos with.

The event enjoyed a real success among the participants, who understood at the end of the day that anyone can be a hero who protects nature and the environment if he knows how to collect selectively and to recycle waste.

„By means of every activity that we are involved in, we want to be an example for the community we are part of. For us, the present and the future are very important and depend entirely on the care we have for the environment. This is why, the cooperation with the associations specialized in environmental protection represents a natural initiative in AFI Ploiesti social responsibility strategy. We are thankful to them and we are happy to work together to educate people on the environmental protection and creation of a sustainable future for all of us”, Iulia Borsan, Corporate Marketing Manager, AFI EUROPE declared.

,,This year, we wanted to mark World Environment Day by means of an event dedicated to children as they are the most receptive to our messages, and in the enthusiasm of those who believe in heroes stories, they can convince their parents and relatives on the need of this gesture which is very simple, namely not to throw away garbage, but to deliver it to specialized centers. From this perspective, we appreciate AFI Ploiesti initiative and we hope that other shopping centers will follow it, by understanding that due to the intense traffic of customers who visit the shopping center, being most of the times a leisure destination, they have to take an education responsibility, thus respecting the environment and the people’s health”, Andrei Orban, the chairman of Environ Association, declared.

The activities that more than 300 children participated in are part of campaign ,,Baterel and Non-E” World, an interactive project, which enjoyed success nationwide, among students, teachers and parents. The participants benefit from unique platform in Romania, www.magazinbaterel.ro, online store which uses a point payment system, so that all competitors have the opportunity to choose from a wide range of school supplies. 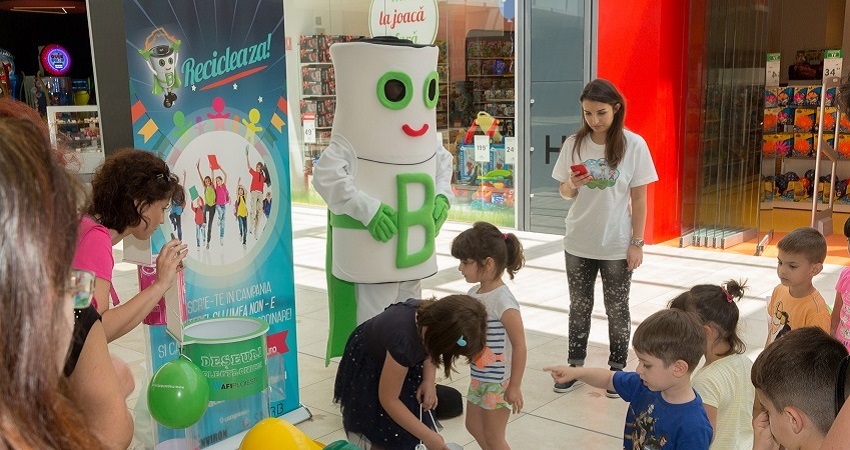